Tormentos Reef is an exposed, widely spread and fairly broken-up patch reef system interspersed with wide, sandy channels. It is quite a popular site for the second dive of the day, since the top of the reef comes to within 30 ft/ 9 m of the surface. It drops steeply to 69 ft/ 21m on the outward side of the slope, where there is a secondary reef. The reef consists of around 60 separate coral heads covered in a wide variety of brain corals, sea fans and whip corals. Colorful sponges adorn the canyons and there are many different invertebrates hiding in the rocky crevices.

At the end of the dive, as the current takes you gently north, there is a huge underwater formation similar to a terrestrial sand dune, which can be seen quite clearly from the air as you fly into the island. Although the current can occasionally be strong, the boat-handlers are very experienced along this reef and will drift along with you in the current. Schools of Creole wrasse move over the reef crest. 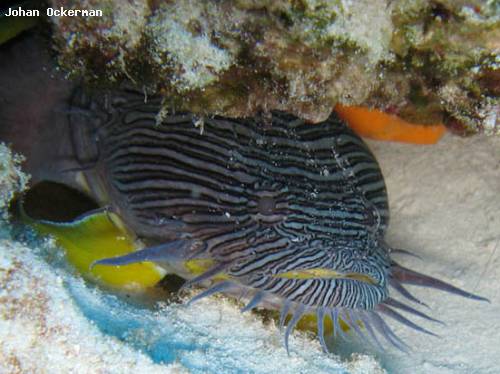 Tormentos Reef is another series of colorful coral heads teeming with marine life that are separated by sand valleys. The coral heads are populated by big moray eels and angelfish and lie 12 to 20 meter below the surface. You can find some of the strongest currents. Many large coral pinnacles covered with brain and whip corals. Eels, angelfish, groupers, grunts and snapper are common as well as smaller reef fish.